Recalled one of the dreams, well a bit of it: On the upstairs of an old double decker bus, only a few seats – people sleeping some on seats some in sleeping backs – arguing between themselves. That’s all I can recall.

I remembered it was the bin collection day so went down put the kettle on and took out a bag and moved the bins to the collection spot.

Took a photo of the street but it was too dark really, the bins didn’t show up at all, but the lights gave an interesting David Bailey display I thought.

Back into the hovel and made me cuppa and returned to the laptop to start this dairy.

I set the reminder thingy on me mobile so as not to forget the Iceland delivery coming presumably between 1100 – 1300hrs today.

The angina seemed a lot easier this morning, Arhtur Itis still not so good, but overall I think I might still just pass an M.O.T.? Oh, maybe not though. Heheh!

Did Facebooking and blogging for a while, taking me medication with yet another cuppa (Three this morning now, Note to self: Must resist this in future). 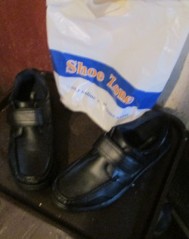 Got myself spruced up and well Phorpain-gelled-up-on-the knees, new shoes on and ready to set off to go to town.

The new shoes I chose due to their high quality and classy looks.

(Alright then, they were the cheapest in the Shoe Zone shop – Tsk!)

Then I remembered the Iceland delivery – Tsk!

So made up me medication pot’s while I was waiting.

The delivery came around midday. And they delivered for free! All the stuff was in stock and delivered.

They kitchen towels were light not much on the roll, but very soft and at 4 rolls for a quid good value too.

I’m not walking to town this morning, the rain was too heavy for my liking.

Going to the bank first to sort out why I had received a letter telling me my house insurance had not been renewed when I paid it Monday before last at the bank.

message to the scrote “If yer too scared to ride on the road you shouldn’t be on a bike – can I change yer nappy for yer?”

But he’d got his head down and belting along so fast I don’t think he heard me – perhaps just as well anyway eh?

The bus arrived and was well packed with Senior Citizens using their free bus-passes, as was I of course. Hehe!

The bus dropped us off and I poddled to the bank and recognised the chap who rang for me and paid me Insurance last time I was in.

I explained and he remembered doing it and checked in his computer to find out it had been forwarded to the Insurance company. He could tell I was concerned and rang them for me. But it got busy with people waiting and after going through the ‘Press button so-and-so for…’ routine, he could get no answer from them.

I mentioned at this point that I had similar problems with the BT helpline: He grimaced and said: “Don’t mention them please all the hassle I’ve had with them…” Fancy that I thought, a dissatisfied BT customer…

He hung on the line for a while, but other people waiting were getting a bit agitated so I suggested I call again on Monday and he can try again then? He seemed happy with that, so I gave him a bar of Galaxy, thanked him and left.

Then I walked up to the opticians to inquire about the cost of a pair of Bifocals. She explained that they do not do them any more, only Varifocals because Bifocals had a line across on the lense.

I told her that is why I liked them, but never mind, how much would a pair cost me please? Because I’d bought two pairs recently with the second being half-price, she could do me a pair for 40% off!

So I agreed and she only charged me £70 all in. She was amazed at how I took only 20 seconds to pick the frames out. No fashion statements needed with my mush and age!

I walked back to the City Centre and caught a tram to Bulwell (Sneaking a few seeds to the pigeons as I waited).

When we got to the Tram depot we all had to get off and catch the one behind. No idea why, but it didn’t half set a lot of passenger moaning. Whatever the reason, these things happen in life. 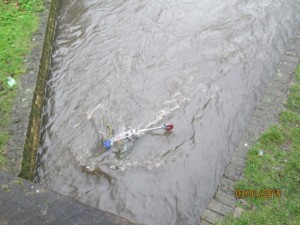 When I dropped off at Bulwell the rain had lessened a bit and I made for the River Leen to feed the mallard ducks and pigeons from the bridge. The river level was twice its normal and the dirty water was flowing very rapidly passed the newly dumped Tesco shopping trolley in the river.

But there were no signs of the Mallards at all? (Sob)

I went to the freezer shop in the hopes of getting some blackcurrant/ice-cream lollies, but was out of luck, none to be found.

Bit of excitement at this point.

As I crossed the road to the market, well I say market, a sad imitation really today. Not many traders or customers about in the rain.

Three youths appeared out of an alley pursued by two police constables and off towards the housing estate.

Excitement over I checked out the other freezer shop for me lollies without success. 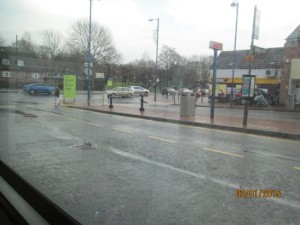 I limped to the bus station and caught a number 17 back to Carrington.

The rain was now coming on and off but again not as heavily as earlier.

I took a photo from through the bus window of the station. Not a bird in site.

Was it the rain and wind keeping them away? Weird this I thought.

Read a bit more of me book en-route back to the dump.

Even on my street there were no birds at all. Wish I knew why? 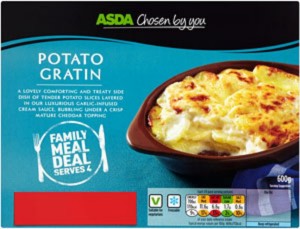 Got in the flea-pit and WC’d then made a cuppa.

Plan to have the potato-gratin later tonight with some sausages I think.

Started this Diary and did a bit of Facebooking.

I enjoyed the Asda Potato Gratin I must say, mind you I hope it doesn’t start the rumbling innards off again.

The pack claimed it serves 4? Well this one didn’t, it just served Inchcock along with a bit of chicken leg and much bread?