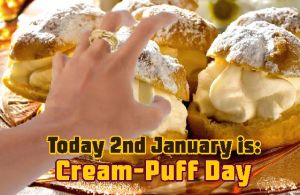 022:10hrs: After a grand four-hours kip, I stirred back into a mock, ersatz, imitation life, in need of a wee-wee.

I started to sing ♫Oh, what a beautiful morning♫, bounded up sprightly springing out of the recliner, and hastened skippingly to the NWWB (Nocturnal-Wee-Wee Bucket). I passed a healthy, powerful, light coloured wee-wee…

Oh, alright then; I struggled out of the £300, rusty second-hand, c1968, cringingly-beige-coloured, not-working, rickety, incommodious, grotty recliner, and somehow manipulated my horrendously flabby, overly-stomached wobbling body up on its feet. Caught my balance, and limped to the bucket, and spent a few minutes waiting for the wee-wee to start, and few more waiting for it to stop. 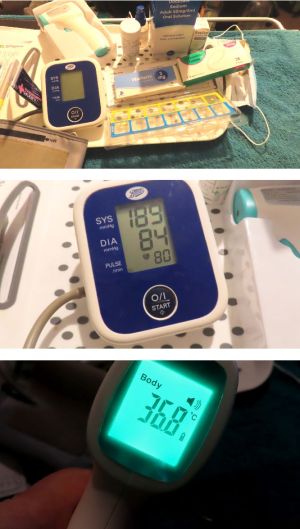 Washed my hands, and started the Health Checks, then took the medications.

Disconcertingly, the Boot’s made in China Sphygmomanometer, gave a higher reading for the SYS, up again!

However, the Chinese’s body temperature made Harpin Xian Di contactless thermometer, was back down and in the green. I’m not doing very well here, am I? Tsk”, Spurgledamnations! and Hogglebogwash!

I made a start on the updating of yesterday’s post. Got it finished and posted off to WordPress. During which, I only needed two wee-wees, and the taste of last nights Marmite feast kept coming back up. I liked it! Hehehehe! Went on the WordPress reader. Then the blog comments.

Emailed the link. Did the Facebooking catch-up. A better than average, for me, TFZer graphic (top of this page) was created, it is TFZer Keith, who has just got home from a week or more in the hospital, with the bloody Coronavirus! Hope it cheers him up a tad. Good luck, mate!

It was yet another mammoth content affair, it needed a fair bit of input from me to get things moving, and rid the innards of it, too! Which went against the earlier believe that things were going to be under the control of Trotsky Terence. Constipation Konrad was back in charge. The crossword book had a good bashing in between the starting and stopping of the torpedo’s evacuation. Hehe

Washed the hands and as I was doing so, a noise like yesterday morning was heard. Much like heavy machinery starting up, followed a minutes later, the sound of it dying down again. I wonder if anyone else heard it? Ah, well, as I am in lockdown, the chances of seeing anyone, to ask them is minimal.

I nipped to the kitchenette to make another brew of Glengettie, and crack my ankle knuckle on the door frame edge. Naturally, I merely laughed at the pain, smiled and carried on to make the brew… but the innards rumbled, and a second summoning to the Porcelain Throne arrived, off to the wet room I hobbled. 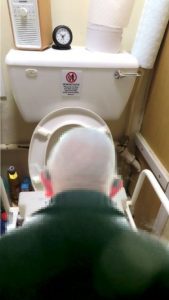 Well, this visit was totally different than the one that was taken only a few minutes ago?

How come, the change? Why? What’s going on here? The blood pressure is going ape-shit! The Porcelain Throne visits are different every time! The wee-wees are, too! Shit is going. The skin varies from pale to almost transparent! The balance is so variable, but why? And another thing is why it is always holiday times when people are not available to get help from, that these things happen? Hey-Ho! Rant over! 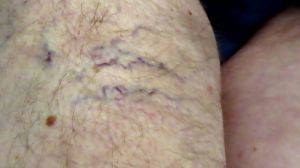 As I was washing after the evacuation, I spotted a new burst of veins coming through on the right leg. And, a new spot developing and growing quickly, well several of them. Ah, well, back to the computerisationing. 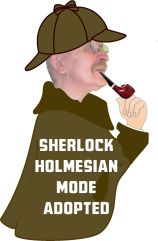 The sounding much-like heavy machinery starting up, followed minutes later with the sound of it dying down again, just repeated itself once more. I’ve started shivering for some reason, feeling so cold. I checked the heater, its warm, but only just? Looked at the thermometer-humidity thingy, then checked it against the wall thermometer. One indicates it is 38°c, the other 23°c? Was it something to do with the heating, the noise I mean?

The temperature on the wall thermometer puzzled me a bit. So I picked it up to investigate further, in my Sherlock Holmesian, style. Guess what? It shattered to pieces in my hand! The mysteries of Qoodthorpe Court, returning? Humph! 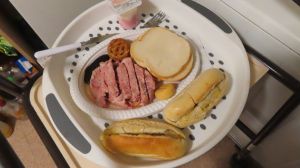 got breakfast made up. I really did feel hungry and made a decent plateful. Once I settled to eat it, I could manage even a quarter of it. Everything tasted different than I expected? Horrible! Even the mini pork and pickle pie and MArmite cheese were tasteless. The majority of it ended up in the bin. What a shame!

Back to CorelDraw to do some graphicalisationing for later on. A couple of hours later, the weariness dawned, I continued to update the blog for another hour or so, and oddly the hunger returned? What’s going on here? Beats me! I went to get the main meal sorted out. I got the meatballs in the oven cooking, and the CCC (Chilli-Con-Carne) in the saucepan (canned today). I must order some more minced beef.

Then got the meal served-up and in the dish. It looked good, I’d got the milk roll bread to soak up the liquids, and started the feasting…

Oh, sod-it! The taste goblets were still flat. I’m sure I cooked the meatballs right, this should have been a right treat to gustatory cells. But again, half of it was thrown away. Tsk!

I put the things in the kitchen, turned off the computer, and sat down, to have a ponder over things. I think I fell asleep straight away…

I woke at 23:00hrs, feeling uncomfortable in mind and body.